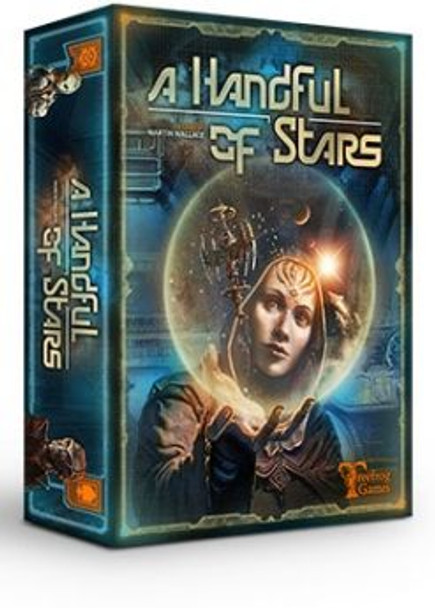 It was the aftermath of the time known as the 'Great Cosmic Ripple'. For reasons not fully understood by the scientists of the time the empires of the Arm had been ripped apart and spread randomly among the stars, as if shaken around in a large box! It is now time for the space faring races of the Voltare Arm to reunite with their own and put back together what had been so terribly disrupted. Great space eets are now embarking on missions to re-establish their empires while conquering those star systems that happen to be in the way. Your challenge is to lead one of the seven races of the Arm in consolidating your empire and invading new worlds. You will need to build eets of ships, research new technologies, plan long-term strategies and ride the waves left from the 'Great Cosmic Ripple'.

This is a limited edition run of 2500 copies (with artwork exclusive to this version), as this is the last Treefrog game that will be published. This is not a Grey Fox Games title, we are only taking and fulfilling the orders for Treefrog.

(As this isn't our game and we're just doing fulfillment, any coupon codes or shipping discounts we have running will not apply to this game. We apologize for any inconvenience this may cause.)

War of the Worlds: The New Wave

MSRP:
Now: $34.99
Was:
War of the Worlds: The New Wave is an asymmetrical deck-building game with a playing board for two players. The game events unfold several years after the original “War of the Worlds”...

MSRP:
Now: $89.99
Was:
In Reavers of Midgard, you'll be looking to gain glory by raiding nearby villages for their riches, sacking well-fortified castles and battling both man and monster on the open seas. You'll not only...

MSRP:
Now: $26.00
Was: $39.99
A social game of deduction and deception. Who among you can see through the lies? Who is capable of getting away with murder? In Deception: Murder in Hong Kong, players find themselves in a scenario...

MSRP:
Now: $24.99
Was: $34.99
Feelinks is a family friendly party game from the designer of Dixit. Gameplay is as simple as picking how you feel about a given situation and guessing how someone else feels about that same...

MSRP:
Now: $69.99
Was:
City of Gears is a unique steampunk game of exploration, area control, worker placement, and strategy designed by Chris Leder and Daryl Andrews. From your mighty Factory, you must race to claim...

MSRP:
Now: $17.99
Was:
Bushido: Rising Rage is the first expansion to Bushido. The expansion focuses on the rage mechanic in the game, giving players more ways to use and acquire rage. Twenty new Technique Cards often...