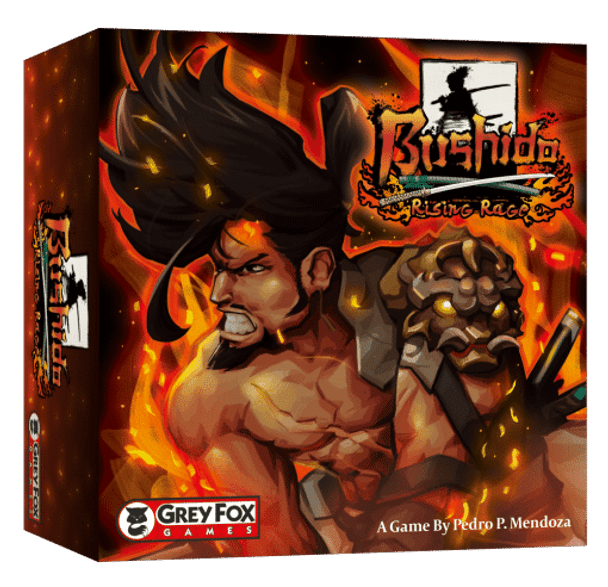 Bushido: Rising Rage is the first expansion to Bushido.

The expansion focuses on the rage mechanic in the game, giving players more ways to use and acquire rage.

Twenty new Technique Cards often feature ways for you to acquire or spend Rage Tokens, and the new green dice the expansion adds feature a Rage Result allowing players a way to collect Rage Tokens without changing their guard! Four new weapons add even more variety to what you can bring to the fight.

MSRP:
Now: $44.99
Was:
A long, long time ago on the far flung planet of Asteros, an ancient king confined unspeakable monsters behind a Rune Gate and sealed it shut with 4 divine Runes. The gate has stood dormant for more...

MSRP:
Now: $44.99
Was:
(THIS IS A PREORDER FOR THE DELUXE VERSION OF ARCANA RISING AS SEEN ON KICKSTARTER) Arcana Rising invites up to six spellcasters to participate in a competition to acquire arcane artifacts and...

MSRP:
Now: $69.99
Was:
It was the aftermath of the time known as the 'Great Cosmic Ripple'. For reasons not fully understood by the scientists of the time the empires of the Arm had been ripped apart and spread randomly...

MSRP:
Now: $114.99
Was:
Do you hear the song of Midgard? Will you answer the call and defend the people from marauding trolls, fierce draugr, and intimidating monsters? With the Champions of Midgard Bundle now you'll be...

MSRP:
Now: $29.99
Was:
Neoprene Game Mat: 1 21″x42″ Neoprene Game Mat featuring the main game board as well as the Dark Mountains and Valhalla expansions boards, all in one.

MSRP:
Now: $4.99
Was:
Do you have what it takes to bet, borrow and steal your way to wealth and victory? In Captain's Wager, players take on the roles of rogue airship captains sending their pirate crews off on adventures...

MSRP:
Now: $59.99
Was:
City of Gears is a unique steampunk game of exploration, area control, worker placement, and strategy designed by Chris Leder and Daryl Andrews. From your mighty Factory, you must race to claim...