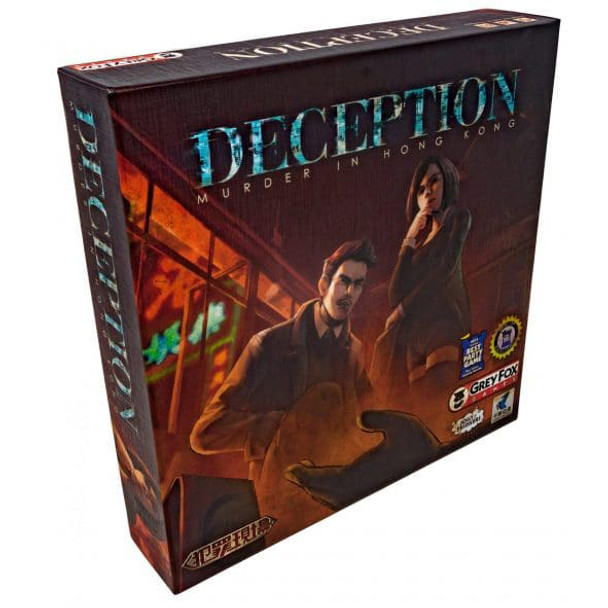 A social game of deduction and deception. Who among you can see through the lies? Who is capable of getting away with murder?

In Deception: Murder in Hong Kong, players find themselves in a scenario of intrigue and murder, deduction and deception. One player is the Murderer, secretly choosing their weapon and the evidence they leave behind. Another is the Forensic Scientist who holds the key to convicting the criminal but is only able to express their knowledge through analysis of the scene. The rest are investigators, interpreting the clues to solve the crime - and the killer is among them. Investigators must collaborate and use their wits, their hunches, and their keen deductive insight to correctly identify the means of murder and the key evidence to convict the killer. The murderer must mislead and confuse the investigators to save themselves. Do you have what it takes to see through the lies and catch the criminal in your ranks or will they muddy the waters long enough to get away with murder? Check out the rules here!

MSRP:
Now: $9.99
Was:
Five promo cards for Deception: Murder in Hong Kong, including three means cards and two clue cards. Secondary language on these cards are Korean instead of Chinese. Means Cards Angry...

MSRP:
Now: $25.00
Was: $28.00
15 Premium Role Cards, 14 Metal Shields to replace the cardboard tokens and 6 plastic microscopes to replace the Bullets from the base game.

MSRP:
Now: $16.00
Was: $24.99
Deception: Murder in Hong Kong is one of our favorite games. Over the last year and a half we have loved playing it at conventions and chatting with fans about their best investigations, biggest...

MSRP:
Now: $25.00
Was: $28.00
15 Premium Role Cards, 14 Metal Shields to replace the cardboard tokens and 6 plastic microscopes to replace the Bullets from the base game.

MSRP:
Now: $29.99
Was:
Neoprene Game Mat: 1 21″x42″ Neoprene Game Mat featuring the main game board as well as the Dark Mountains and Valhalla expansions boards, all in one.

MSRP:
Now: $68.99
Was:
This pre-order bundle includes the Kickstarter version of Tortuga 2199, the Shipwreck Bay Expansion, and all accompanying stretch goals. This product will ship in Q1 of 2021. Welcome Space Pirate! We...

MSRP:
Now: $59.99
Was:
Featured on Geek & Sundry's Tabletop! Trolls attack your town. Draugr terrorize nearby villages. Monsters strike at travelers and merchants alike. The people are suffering - will you be their...